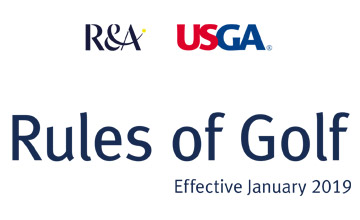 Most golfers will be aware of the recent R&A announcement that the Rules of Golf are changing with effect from 1st January 2019.

The process to modernise the Rules began in 2012 and was initiated to ensure that the Rules are easier to understand and apply to all golfers.

Some of the new rules are quite different, particularly in relation to lost balls, hazards etc see below some of the main changes.

Please look at the new rules in more detail (R&A details below) and take some time to familiarise yourself with them, you will definitely benefit from knowing and understanding the changes.

The R&A are hopeful that one of the main benefits to the new rules is that they will help speed up play. This will only be the case if everyone knows and understands the rules, so please ensure that you take the time to read them.

When taking relief (from an abnormal course condition or penalty area, for example), golfers will now drop from knee height. This will ensure consistency and simplicity in the dropping process while also preserving the randomness of the drop. (Key change: the proposed Rules released in 2017 suggested dropping from any height).

The golfer’s relief area will be measured by using the longest club in his/her bag (other than a putter) to measure one club-length or two club-lengths, depending on the situation, providing a consistent process for golfers to establish his/her relief area. (Key change: the proposed Rules released in 2017 suggested a 20-inch or 80-inch standard measurement).


Removing the Penalty for a Double Hit

The penalty stroke for accidentally striking the ball more than once in the course of a stroke has been removed. Golfers will simply count the one stroke they made to strike the ball. (Key change: the proposed Rules released in 2017 included the existing one-stroke penalty).


Balls Lost or Out of Bounds

Alternative to Stroke and Distance: A new Local Rule will now be available in January 2019, permitting committees to allow golfers the option to drop the ball in the vicinity of where the ball is lost or out of bounds (including the nearest fairway area), under a two-stroke penalty.

There will be no penalty for accidentally moving a ball on the putting green or in searching for a ball; and a player is not responsible for causing a ball to move unless it is “virtually certain” that he or she did so.

There will be no penalty if a ball played from the putting green hits an unattended flagstick in the hole; players may putt without having the flagstick attended or removed. Players may repair spike marks and other damage made by shoes, animal damage and other damage on the putting green and there is no penalty for merely touching the line of putt.

Red and yellow-marked penalty areas may cover areas of desert, jungle, lava rock, etc., in addition to areas of water; expanded use of red penalty areas where lateral relief is allowed; and there will be no penalty for moving loose impediments or touching the ground or water in a penalty area.

There will be no penalty for moving loose impediments in a bunker or for generally touching the sand with a hand or club. A limited set of restrictions (such as not grounding the club right next to the ball) is kept to preserve the challenge of playing from the sand; however, an extra relief option is added for an unplayable ball in a bunker, allowing the ball to be played from outside the bunker with a two-stroke penalty.

A player’s “reasonable judgment” when estimating or measuring a spot, point, line, area or distance will be upheld, even if video evidence later shows it to be wrong; and elimination of announcement procedures when lifting a ball to identify it or to see if it is damaged.

Reduced time for searching for a lost ball (from five minutes to three); affirmative encouragement of “ready golf” in stroke play; recommending that players take no more than 40 seconds to play a stroke and other changes intended to help with pace of play.